skip to main | skip to sidebar
Pearl of Wisdom? 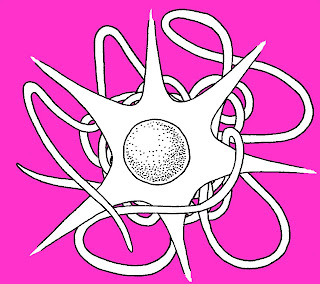 Before you is the answer to a long-running scientific controversy, spawned by a search for truth. The Anxiomusa has many wonderful things to offer us—among them a pearl of wisdom never (until now!) brought to light.

Do you mean an actual pearl?
That depends on what you mean by actual. An ordinary pearl is formed when a bivalve deposits nacre around an impurity. An Anxiomusa pearl is created without impurities inside the wet, squeezing friction of a tightly undulating nematode ball [bolus]. This hidden truth is revealed only to those with patience (and after thoughtful study). Until now, it has been destroyed by ham-handed attempts to dismantle the bolus by force. Alexander the Great made such a mistake when presented with the complicated Gordian knot. Legend promised mastery of the world to whomsoever could untie it, but Alexander simply cut it with his sword.

Cut it with his sword?
Let me explain. An Anxiomusa “knot”, first described by Dr. Robert Casper in 1978, resembles the legendary Gordian knot in its complexity and impenetrability. And with the tacit approval of the scientific community, Dr. Casper, esteemed nematologist, repeated Alexander’s mistake on hundreds, perhaps thousands of occasions, in his rush to be the first to reveal the rumored contents of the Anxiomusa bolus.

Haste leaves him empty-handed!
Casper’s crew lacked the concentration and dedication required to decipher this knot, and after decades of cutting and tearing (destroying each pearl along with its creator) he has been left empty-handed. Like Alexander the Great, Casper repeatedly succeeded in removing the knot, but never held the pearl.


So what is the secret?
The secret to releasing the pearl is patience. Refused by peer reviewed journals, this secret will now be handed directly to the public.


Step 1:
A helpful model for understanding the bolus is to imagine a head with a nose, tongue, and throat. Roll the bolus from hand to hand, touching all parts of the knot. While very tightly wound, the bolus will move constantly with your touch.


Step 2:
Insert the other index finger immediately above and along the ‘tongue’ to find the internal ‘throat handle’.

Step 3:
Pull in opposite directions, firmly and smoothly.
The pearl is yours! Your conscience is intact. Remember, the wise are thoughtful, careful, patient.

You can see my writing in the Nematology Newsletter published by the Society of Nematologists. Please support this important organization with a generous donation.

To receive additional copies of these pamphlets or future pamphlets, send your mailing address to The Mermithid Truth.

To remove yourself from future mailings, send your name and city to The Mermithid Truth and you will be removed from our distribution list.